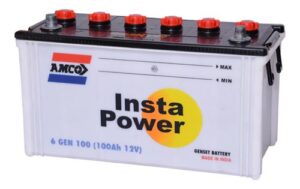 AMCO BATTERIES LTD, a member of the Amalgamation Group of Companies, is a well known and trusted manufacturer of a wide range of Automotive Batteries. AMCO has been a pioneer in this Industry and has been a brand to be reckoned with in the Battery Industry since 1955.

By the introduction of ASA (Alpha Sulphonic Acid) – Charge Boosters during the processes of plate manufacturing, the battery plates retain its dry charged properties for a longer duration than an ordinary process.